The Chess season got off to an exciting start at the Hurst Community Centre on Wednesday night as Sidcup’s 2nd team faced arch-rivals (and good mates) from the new 3rd Team in the Fuller Cup.  Third team captain Lee Brockwell kept his line-up a closely guarded secret until the last moment and then revealed his big gun, David Helps, on Top Board. As it turned out, the 3rd Team out-graded their 2nd team rivals by an average of six points per Board.  In the end those extra points made the difference and the 3rd Team won through by a 3-1 scoreline.  Keith Thompson was not worse until he made a small mistake that lost the exchange and eventually the game to David Helps.  On Boards two and three Leon Hopkins and Peter Houching, and Ian Reeve and Lee Brockwell reached equality, and eventually agreed honorable draws.  On Board four Chris Cheeseman finished with a nice mating attack to take a full point from his game with Ken Grist.

The following evening the Intro Cup team travelled to Dartford to meet a Gravesend 6 team, made up of players from both Gravesend and Dartford Chess Clubs.  The evening went largely according to plan – but with one or two hiccups on route!  On top Board Leon Hopkins playing his second match on consecutive evenings eventually ground down his opponent for the win.  But on Board two, Lee Brockwell blundered a Knight and went down – in the post-match analysis Lee found the move that would have won the game, but that’s chess!  Gravesend’s Junior, Conner Phillips, had Ken Grist on the ropes for a while, but the position became blocked and both players shook hands on a draw.  Board four provided all the excitement. In a wild game, John Morris first won the exchange, but then dropped a piece, albeit with good counter-play.  The game ended when John found a ‘royal’ fork.  His Knight checking his opponent’s King whilst also attacking Queen and Rook.  The game was over and Sidcup had won the match by the narrowest of margins – 2.5 – 1.5. 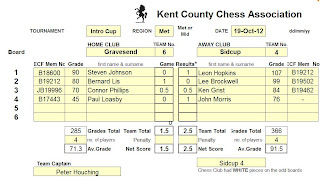 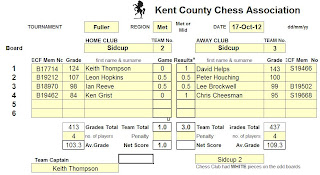