Congratulation’s go to Sidcup 2 who had a great win against Medway 3 in their Semi-final match to reach the Final of the Fuller Competition which will be held on the Sunday 13th May at The Mick Jagger Centre Dartford.

They were well out-graded by their opponents who’s total grade rating was 433 against Sidcup’s 392 – a total of 41 grading points higher.

The evening started off very well with Ken Grist (Grade 89) earning a very good win over his opponent Isaac Oluwale (Grade 92) and at one stage each board had winning chances. It looked as if the team would have a 4.0 win then Keith Thompson (Grade 121) lost to Paul Foster (Grade 140) who, after being in a winning position, blundered missing a skewer move on his 2 rooks on move 34. He disheartenedly resigned immediately, being a bishop down and in a losing position.

With the score at 1 point each it meant that Ian Reeve and Leon Hopkins had to come up with at least 1.5 points between them as a 2 all draw was no good to Sidcup since they would lose on board count. Leon (Grade 97 and who has not lost for the Fuller Team this year) managed to keep the team on track with a draw against Doug Smith (Grade 113), retaining his unbeaten run for the team and gaining the half a point.

Then Ian Reeve (Grade 85) playing Barry Hampton (Grade 88), came up with the full point that was needed to ensure the 2.5 to 1.5 win which meant that Sidcup 2 went through to the final against either Beckenham 5 or a strong looking Snodland 2 side from the Mid Kent division.

The match between Snodland 2 and Beckenham 5 will be played on the 24th April at Snodland to see which of these team Sidcup 2 will be meeting in the Final.

Our best wishes go to our 1st team when they meet Snodland 1 in their Semi final on the 4th May. 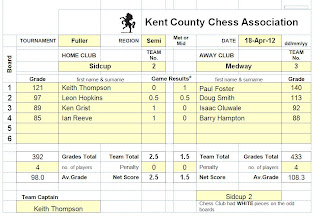