This is the final part of my series. If you haven’t already, please ready parts one, two and three which led up to this.

By this time other players were starting to wish me luck, and I was getting friendly smiles from all sides. I was feeling very confident.

White seems to prefer Knights to Bishops, but Black was happy to trade them off.  The opening follows a variation from Cyrus Lackdawala’s book on 1….d6  and I seem to have come out of the opening phase reasonably well. 21.d4 cd4 22.Nxd4 Qb7

It is not often that one achieves a Royal Fork in a game and even less often that it need not be exploited.   I was very pleased with this game as it ensured that I would at least have a share of first place, no matter what happened in the last round.

A look at the leader board showed that with best results by my opponents I would share first place even if I lost the last round.  I very nearly did just that, but as in Round 7 luck swooped in to save me.

7 Qxd8+ Kxd8.  Caught between two openings with the worst features of both, I can already hear the rumble of thunder.

However luckily obtained, the title of World Champion  Grade E was mine.   Margaret had been waiting nervously outside the playing room and was receiving updates from passing players.  The grim news suddenly turned sunny so she was as thrilled as I was.  The closing ceremony passed in a daze, but my wife took a shot of me and my trophy that I can admire when I get old and grey.

Here are the players that took part and one final photograph of me. Thanks for reading, Bob. 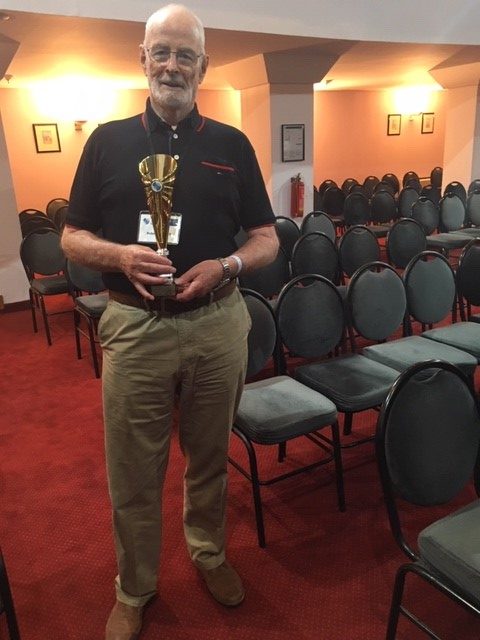